About a year ago, I bought a dusty old Panasonic WU-475 1.2MB 5.25” floppy drive from someone on Kijiji. It was being sold as-is, but for the price I decided to give it a go. To my surprise, it seemed to work initially, but within a few minutes it began to emit a horrid clanging and grinding noise. After opening the drive up, it was clear that the stepper motor had completely ceased up.

After applying some lubricant to the rail and cleaning the drive out, the motor was again functional. Thinking it would be good to go, I installed it and tested it out again. Excitement quickly turned to disappointment, however, when I discovered that the drive could no longer read any of my 5.25” floppies. After troubleshooting for a while, I discovered that if I formatted a disk using the drive, it could be read/written just fine. It was only diskettes from other sources that wouldn’t work. This behavior seemed to indicate that the drive somehow went out of alignment during my disassembly and cleaning.

I didn’t know much about floppy alignment aside from the fact that some specialized equipment that I didn’t have would be needed to correct the problem. Generally an oscilloscope is used to take readings during sector reads and then fine adjustments are made until the waveform looks correct. This was the suggested method I discovered in the Panasonic service guide for the WU-475.

Discouraged, I had shelved the drive and let it sit for the better part of a year. Fast forward to May 5th – the 26th anniversary of the classic PC game Wolfenstein 3D. It was time to do something retro. I really wanted to get this drive working again, so I did some more research on the subject. That’s when I came across an old thread at the Vintage Computer Forum. A commenter named Rick discussed a great piece of software called ImageDisk by Dave Dunfield. Because I had some brand new 1.2MB IBM formatted diskettes that had never been used or formatted by another drive, I could use these as a reference point and make the necessary adjustments. At any rate, it was certainly worth a try! 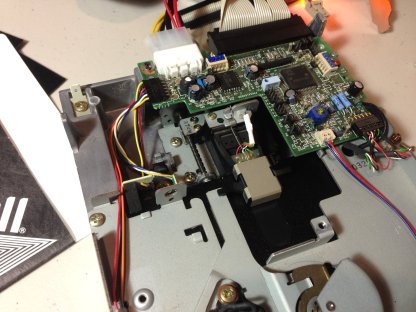 Every drive is different, but the WU-475 has a pair of screws that hold the stepper motor in position. The screw openings are not perfect circles and allow the mechanism to be slid back and forth a millimeter or so in each direction.

Firing up ImageDisk and running the alignment test, I was initially greeted by lots of question marks scrolling down the screen indicating that each sector could not be read. As I loosened the screws and slid the mechanism forward slowly, the PC speaker sprung to life and began to beep indicating successful reads. Once I had it in the position that seemed to yield the best results, I scrolled through all 80 tracks to ensure they could all be read. I then tightened the screws well and lo and behold, the drive works wonderfully again! I’m sure my alignment isn’t perfect, but for all intents and purposes, the drive works.

It’s always a great feeling when you can restore something old and forgotten. As always, do this at your own risk. Making adjustments like this on a live system is inherently risky, so be careful!