Today I’m going to shift gears a bit and take a look at some retro PC keyboards.

I’m currently in the process of refurbishing a couple of old PCs, including a classic DEC brand 486 DX2 and a newer 2001 era AMD Athlon system. A lot of people see these machines as trash, but for me there is a lot of nostalgia around systems like this and I see value in trying to restore and maintain them.

One of the first problems I ran into when trying to test out these systems is that not all keyboards were created equally. There are several connector standards that have been used over the years including AT, PS2 and more recently, USB. I have always kept a couple of USB to PS2 adapters for occasions such as this, but to my surprise, three USB keyboards I tried were simply not functional when using the PS2 adapter. As it turns out, there needs to be some intelligence in the keyboard itself to know when its been plugged into a PS2 port in order to function based on that signalling standard. The only keyboard I could get to work with the adapter was my trusty DAS Keyboard, that I was not willing to move away from my main system.

After browsing around on eBay and retailers like NewEgg, I was surprised to see that PS2 keyboards and especially AT keyboards were getting pricey and difficult to find. It seems it’s simply a matter of supply and demand.

Undeterred, I decided to take a trip to a few Value Village and other thrift stores in the area. I found a ton of USB keyboards but came across a couple with potential. One was a Mitsumi 104 key Windows 95 era AT keyboard, and the other was a ~2002 era Microsoft Multimedia keyboard with a PS2 connector. The problem was that they were both just plain nasty – three dollars but pretty gross. 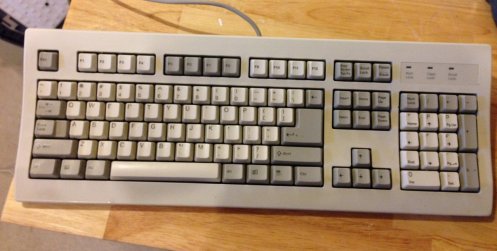 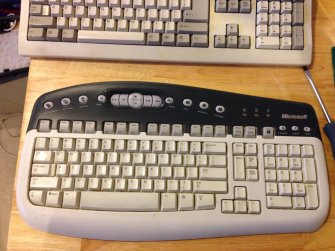 I’ll warn you now not to continue reading if you are eating, or are a squeamish person. The Mistsumi keyboard was actually not too dirty, but did smell of cigarette smoke. The Microsoft keyboard was another story.

When I took a close look at it, there was no avoiding the fact that it would have to be completely disassembled to properly clean and disinfect. And yes, that is indeed a paperclip that was jammed under some keys on the number pad! 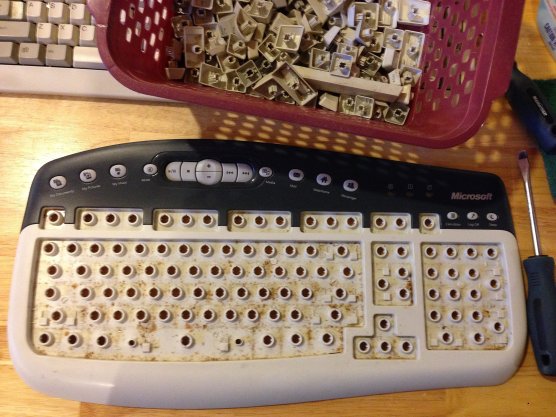 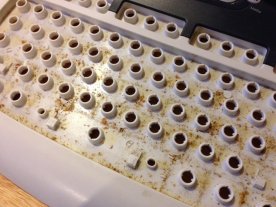 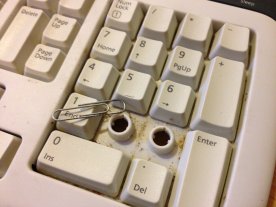 Disassembling the keyboard wasn’t difficult. There were about a dozen or so easily accessible screws at the back. 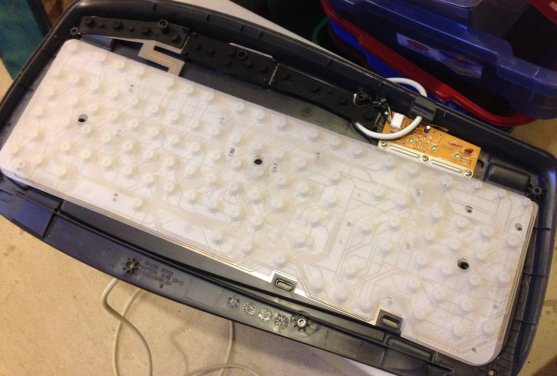 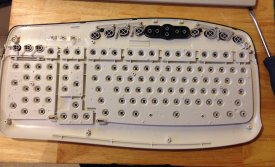 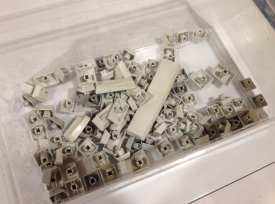 Once I took it apart, it was simply a matter of popping out each of the keys from the rear and spending a ridiculous amount of time at the basement utility sink cleaning them. I used both regular dish soap and did a round with bleach to disinfect the keys and all of the external parts of the keyboard. 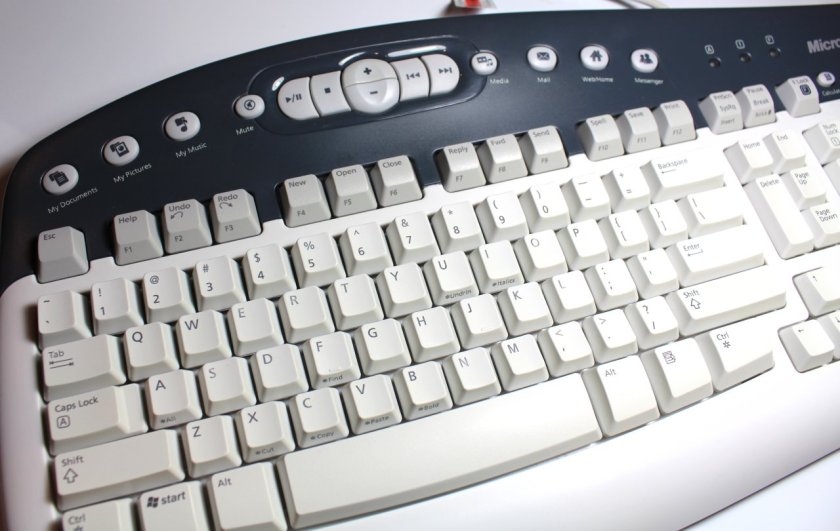 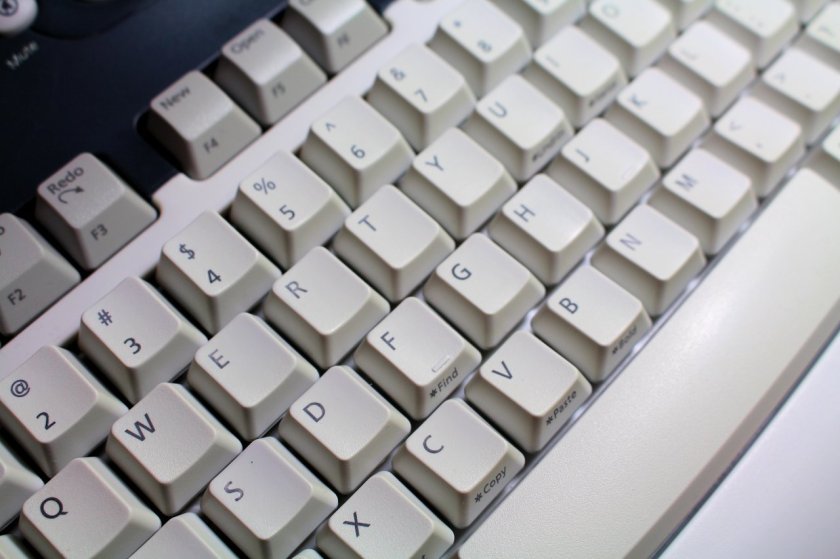 The end result was pretty awesome. Depending on the lighting, you could see that the keys were discolored due to age and sunlight, but the keyboard was like new when I was finished. 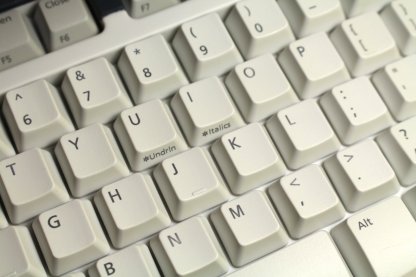 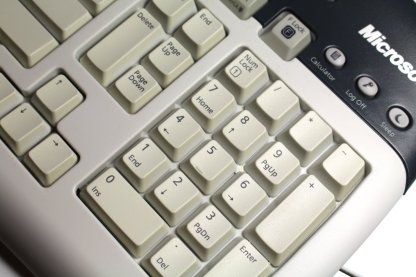 Not bad for $3, and age appropriate for my 2001 AMD system that I’m currently restoring.

The Mitsumi keyboard was dated 1996, a time when PCs were built a lot more solidly and keyboards were no exception. This thing had some weight to it and after disassembling it, I could see why. 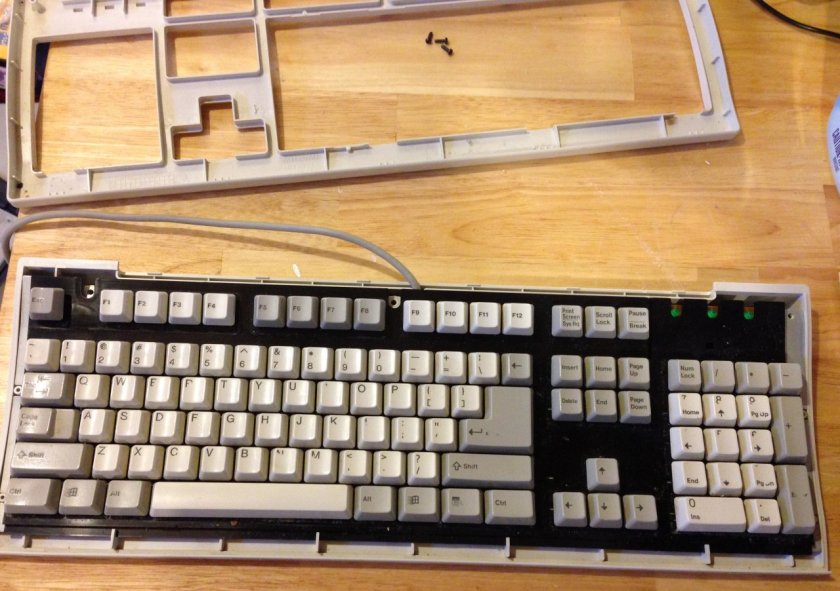 The two-piece plastic shell is easily detached after a couple of screws are removed. Inside, there is a layer of thick metal, a contact pad and then the black plastic base with the rubber domes and keys attached. 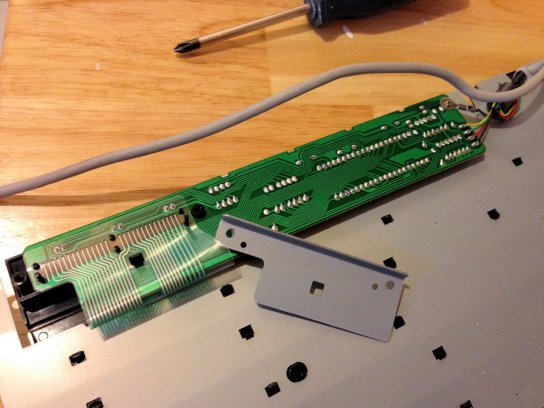 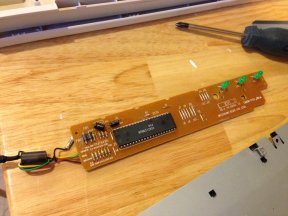 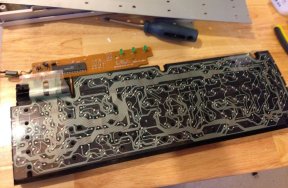 Unfortunately, it didn’t seem that I could safely remove the key caps from this keyboard without damaging the domes, so I had to remove everything sensitive to water and clean the black plastic base that holds the rubber domes and keys as one piece.

Unfortunately, even after washing it several times with bleach and soap, there is still a faint smell of cigarette smoke. It’s not nearly as strong as before, but I’m going to let it soak in warm water and baking soda to see if there is any way to get rid of it.

Anyhow, this was a fun albeit time consuming process. It’s always fun to breathe life into some old hardware and to keep it from getting tossed.

Stay tuned for a look at the 486 DEC system and some other retro rigs.