Welcome to the eighth installment of a new series of NSX troubleshooting scenarios. Thanks to everyone who took the time to comment on the first half of scenario eight. Today I’ll be performing some troubleshooting and will show how I came to the solution.

Please see the first half for more detail on the problem symptoms and some scoping.

In the first half of scenario 8, we saw that our fictional administrator was getting an error message while trying to deploy the first of three controller nodes.

The exact error was:

Unfortunately, this doesn’t tell us a whole lot aside from the fact that the manager was waiting and eventually gave up. 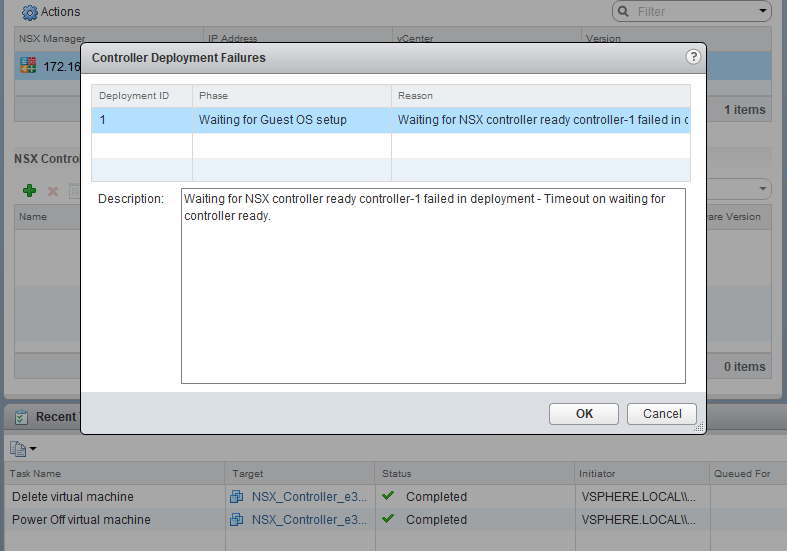 Now, before we begin troubleshooting, we should first think about the normal process for controller deployment. What exactly happens behind the scenes?

Let’s have a look at the NSX Manager logging to see if we can get more information:

As you can see above, NSX Manager is attempting to communicate with the controller using a REST POST call, and it’s failing. The reason, however, gives us more than the UI – No route to host. It seems clear that there is some kind of a L2/L3 network communication problem between NSX Manager and our newly deployed controller.

Although our controller reports as ‘Deploying’ in the UI, we still have a window of opportunity before the appliance is deleted. It appears that NSX Manager gives the controller node about 10 minutes before it gives up and the deployment is rolled back. In this time, we can log in and do some basic network connectivity tests.

First, I was able to confirm that the appliance does have an IP address from the pool and that the gateway was configured.

Second, I attempted to ping the NSX Manager appliance in the 172.16.1.0/24 network. Not surprisingly, it cannot be reached.

Narrowing things down even more, I can see that the default gateway of 172.16.15.1 can’t be reached either.

This appliance will not be able to communicate outside of its subnet. If the controller node can’t communicate with NSX Manager to service the necessary API calls, manager will assume the deployment has failed and the deployment is rolled back.

Although it’s common to have NSX Manager and the Control Cluster in the same subnet, there is no reason they can’t be multiple hops away. In this case, we couldn’t access 172.16.15.1, which is supposed to be a L3 switch SVI. Not only could we not reach this from the controller node, but not from anywhere else in the network either.

That said, we consulted with the local network administrator and discovered that the controllers were in VLAN 15, and that an SVI had not yet been configured for that VLAN. The default gateway address of 172.16.15.1 simply didn’t exist. Once VLAN 15 had a virtual routing interface configured, subsequent controller deployments were successful!

From the switch routing table after the SVI was added:

Now the controller is listed as ‘Connected’ instead of ‘Deploying’:

I wanted to take a moment to share a couple of twitter comments I received on the first half of this scenario. @alagoutte correctly points out that NSX Manager and the controller node aren’t in the same subnet and that there may be communication problems:

NSX Manager and NSX controller are not on the same network ! May be need to check if the routing work (and no firewall ?) between the 2 network ?

Also, @nmorgowicz hit the nail on the head:

IP/VLAN may be improper, and if controller cannot hit NSX manager, it won't get built properly.

Thanks to everyone who took the time to post.

As always, if you get a vague message in the UI, don’t hesitate to look at the logging for more detail. Quite often the problem will become clear with the extra detail provided there. I hope this was useful. Please keep the troubleshooting scenario suggestions coming! 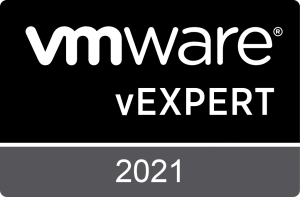