Using thin provisioned virtual disks can provide many benefits. Not only do they allow over-provisioning, but with the prevalence of flash storage, performance degradation really isn’t a concern like it used to be.

I recently ran into a situation in my home lab where my Windows jump box ran out of disk space. I had downloaded a bunch of OVA and ISO files and had forgotten to move them over to a shared drive that I use for archiving. I expanded the disk by 10GB to take it from 40GB to 50GB, and moved off all the large files. After this, I had about 26GB used and 23GB free – much better. 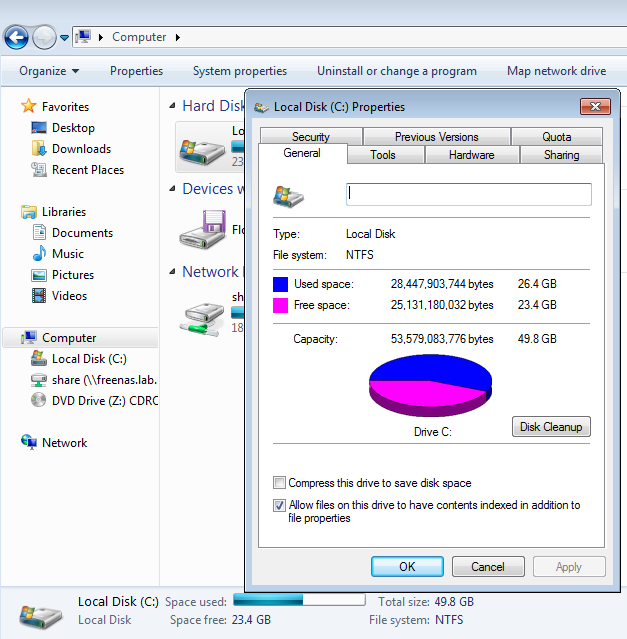 Because that jump box is sitting on flash storage – which is limited in my lab – I had thin provisioned this VM to conserve as much disk space as possible. Despite freeing up lots of space, the VM’s VMDK was still consuming a lot more than 26GB.

Notice below that doing a normal directory listing displays the maximum possible size of a thin disk. In this case, the disk has been expanded to 50GB:

Using the ‘du’ command – for disk usage – we can see the flat file containing the data is still consuming over 43GB of space:

Getting that Space Back!

Although this certainly isn’t a new topic, and has been covered elsewhere, I wanted to document my own experience with this process and provide some extra context in case it may be helpful.

Thin provisioned disks are designed to expand and consume more disk space as the virtual machine requires. Unfortunately, as you can see, thin VMDKs only expand. They don’t shrink on their own to release freed disk space.

There are a few reasons for this, but the important thing to remember is that when space is freed in the guest operating system, it doesn’t mean that those blocks no longer contain data. In the example of my Windows jump box, the deletion of OVA and ISO files simply instructed the underlying NTFS filesystem to make those blocks available to be overwritten. I.e. the data stored there is no longer needed and can be replaced with new data in the future. From the perspective of ESXi, nothing really happened to that VMDK – data is still stored in those same locations despite files being deleted in the guest OS. How can the underling VMFS datastore know which NTFS blocks contain actual data and which can be overwritten in the future? It can’t.

That said, reclaiming the space is a two step process:

Before getting started, there are a few things to check and a few safety precautions that I want to call out:

There are likely several different ways that this can be done, but I used the SDelete method recommended for Windows machines in VMware KB 2004155. SDelete is a free tool made by Sysinternals and available for download from the Microsoft site here.

The tool’s primary purpose is to securely delete files by writing randomized data over released blocks to prevent deleted data from being recovered. Obviously we don’t want to write new data over top of the deleted data, so thankfully the tool also has a ‘-z’ option to write zeros over these blocks instead.

Using the tool is quite simple – just run SDelete (or SDelete64 for 64-bit installs) with the -z option against the drive letter in question. In my case, I just ran: 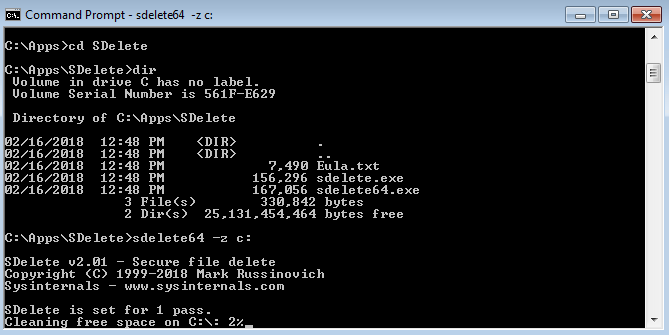 The whole process took only 5 minutes or so and was very uneventful. As expected, from the guest’s perspective, nothing appeared to change.

Obviously, SDelete is a windows-only tool. In Linux, the dd tool can be used in a similar manner. I may run through this process in a future post.

Yes, that is a technical term. The final step is to scan the VMDK disk for blocks made up of all zeros, and then ‘hole punch’ those blocks to be used as free space again in the VMFS filesystem. Unfortunately, this step can only be done with the VM powered off, so you’ll need to schedule a maintenance window for this activity.

To do this, we use the powerful vmkfstools command with the -K switch. Once I navigated to the VM’s directory, I simply ran the following command:

Note that it has to be run against the descriptor file, not the ‘-flat.vmdk’ file. In my case, the process only took about 5 minutes or so. I suspect it would take a lot longer on spinning disks or if the VMDK was large.

I then repeated the ‘du’ command to see the result and was happy to see that the VMDK is now only 27.8GB:

This process allowed me to get back almost 17GB of space on my SSD backed datastore.

And there you have it! A fairly simple process to reclaim thin provisioned VMDK space. Please feel free to leave any questions or comments below, or reach out to me on Twitter (@vswitchzero)