When I built my new compute nodes, I chose PC3L-12800R DIMMs that could run in both standard 1.5V and 1.35V low-voltage modes. What I didn’t realize, however, is that Intel’s specification for 1.35V registered memory on Socket R based systems limits low-voltage operation to 1333MHz. The Supermicro X9SRL-F boards I’m using enforce this, despite the modules being capable of the full 1600MHz at 1.35V.

This meant I could run the modules at 1333MHz and enjoy the power/heat reduction that goes with 1.35V operation, or I could force the modules to run at 1600MHz at the ‘standard’ 1.5 volts. As I considered different configuration options, a lot of questions came to mind. Today I’ll be taking an in-depth look at DDR3 memory bandwidth, latency, power consumption and heat. I hope to answer the following questions in this post:

A Note On Overclocking

Although there are IvyBridge-EP CPUs that support higher 1866MHz DIMM operation, my SandyBridge-EP based E5-2670s and PC3L-12800 DIMMs do not officially support this. The Supermicro X9SRL-F allows the forcing of 1866MHz at 12-12-12 timings even though the DIMMs don’t have this speed in their SPD tables. Despite being server-grade hardware, this is an ‘overclock’ plain and simple.

I would never consider doing this in a production environment, but in a lab for educational purposes – it was worth a shot. Thankfully, to my surprise, the system appears completely stable at 1866MHz and 1.5V. Because the DIMMs can technically run at 1600MHz with a lower 1.35V, it would seem logical that at 1.5V they’d have additional headroom available. This certainly appears to be true in my case – even with a mixture of three different brands of PC3L-12800R.

With my overclocking success, I decided to include results for 1866MHz operation at 1.5V to see if it’s worth pushing the DIMMs beyond their rated specification.

Back in my days as an avid overclocker, increasing memory frequency would generally provide better overall performance than tightening the CAS, RAS and other timings of the modules. Obviously doing both was ideal but if you had to choose between higher frequency and tighter timings, you’d usually come out ahead by sacrificing tighter timings for higher frequencies.

I fully expected the 1600MHz memory running at 11-11-11 timings to be quicker overall than 1333MHz at 9-9-9, but the question was just how much quicker. To test, I booted one of my X9SRL-F systems from a USB stick running Lubuntu 18.04 and used Intel’s handy ‘Memory Latency Checker’ (MLC) tool. MLC allows you to get several performance metrics including peak bandwidth, latency as well as various cross-socket NUMA measurements that can be handy for multi-socket processor systems. I’ll only be looking at a few metrics:

As I expected, despite the looser timings, memory bandwidth increases substantially as the frequency increases. About a 12% boost is obtained going to 1600MHz at 11-11-11 timings. An additional 10% was obtained by overclocking the modules to 1866MHz. Mixed reads and writes get a pretty proportional boost in all three tests. 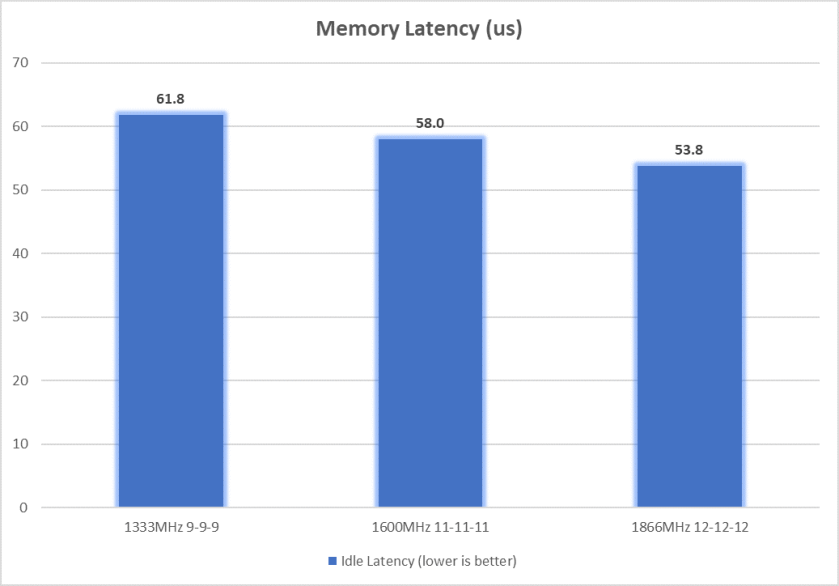 We see a similar picture when it comes to latency, but the difference isn’t quite as large. About a 6% decrease was realized between 1333MHz and 1600MHz with looser timings. The overclocked 1866MHz takes it a step further and buys an additional 8% improvement.

To check power consumption differences, I plugged the AC cord of the system into a simple power meter. Only the tower was connected to the meter – no other peripherals. To check idle power consumption, I booted into Lubuntu 18.04 and let the system sit for about five minutes. This distribution supports all of the ACPI states of the processor and yields ideal idle conditions. For load, I let Memtest86+ run for about 10 minutes.

Note: Memtest86+ doesn’t stress the system nearly as much as other tools, so this is not the system’s maximum power consumption. I just wanted something that would put load on the memory and the CPU’s IMC.

It looks like 1.35V low-voltage memory really does equate to a measurable power savings. I’m only running four DIMMs in this system, but I’d imagine the difference would be much more pronounced on multi-socket systems using 16 or more DIMMs. The overclocked configuration didn’t make enough of a difference to tip the meter because the voltage remained consistent at 1.5V.

As with most enterprise-grade registered DIMMs, my mix of Samung, Hynix and Micron DIMMs include on-board thermal sensors. To check for heat increases, I simply ran Memtest86+ and looped test #5 (moving inversions) for about ten minutes and then checked the sensor values via IPMI. Since each DIMM’s temperature varied, I just took the average temperature of all four DIMMs. 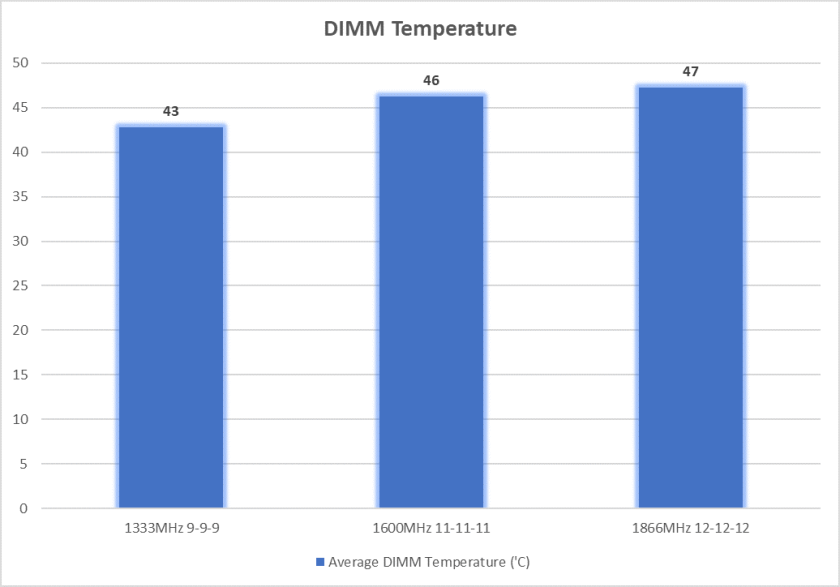 As you can see, running at 1.35V equates to measurably lower temperature. The reduced memory frequency also plays a small role here, but not nearly as much as the reduced voltage and current running through the modules. The difference isn’t huge, but it’s certainly there. Overclocking the modules to 1866MHz didn’t make much of a difference – likely because the voltage remained at 1.5V.

Another variable I was curious about was whether or not using fewer than four DIMMs in the SandyBridge/IvyBridge-EP platforms decreased bandwidth/latency in a linear manner. Unlike most desktop platforms that utilize dual channel memory interleaving, the socket 2011 based systems use quad channels and 256-bit interleaving.

I was honestly not expecting the bandwidth to be so linear. Only the jump from three to four memory channels seemed to have diminishing returns.

I’m not entirely sure why a single DIMM had lower idle latency than a pair of DIMMs, but its bandwidth was significantly lower. From two to three to four DIMMs, latency decreases somewhat linearly.

I think the results were interesting. Some of them I expected – others were a bit of a surprise. What’s important to remember, however, is that these are purely synthetic memory benchmarks. Just because 1866MHz memory is 20% higher bandwidth and lower latency doesn’t mean that your database queries and VM boot times will be 20% faster. There are many other components at play here and quite often memory performance isn’t the bottleneck holding things back. In some real world applications, a 20% memory performance improvement may not yeild any measurable performance improvement. In other workloads, the improvement may be substantial – it all depends.

After going through all of these tests, I’m somewhat torn on what to run my DIMMs at. I’ve got three very viable options, but ultimately I’m leaning towards 1333MHz at 1.35V to reduce power consumption and heat. These compute nodes have plenty of horsepower, and it’s very unlikely that I’d notice the difference between 1333MHz, 1600MHz or 1866MHz.

Please let me know your thoughts! Feel free to leave a comment below or on Twitter (@vswitchzero).