In Part 1 of this series, I took a close look at the Asus P2B slot-1 motherboard and some CPU options. Today, the focus will be on graphics cards.

If this were a pure a DOS build, the card I chose wouldn’t matter very much. I’d simply be interested in something with decent 2D image quality and enough VRAM to support the resolutions I’d want to use. The majority of DOS games don’t offer 3D acceleration but because I wanted a system that would run some Windows 9x based titles, a 3D card would be ideal for that genuine experience.

The years leading up to the millennium were very exciting from a graphics hardware perspective. In 1998, 3D accelerated cards were much more accessible to the average consumer and major strides were made in performance and price.

If you were at all into PC gaming or PC hardware back in the late nineties, you will be well acquainted with 3dfx Interactive. Although the company went bankrupt in 2002, 3dfx was the pioneer in mainstream 3D gaming technology up until that point. The card that brought them to fame was their 3D-only ‘Voodoo Graphics’ adapter released in 1996. They were also well known for their proprietary Glide API that many games of the era supported. The turning point for me personally was when I first experienced GLQuake on a Voodoo card back in 1996. I remember being totally blown away after seeing the surreal lighting and 3D effects and was determined to buy one. After saving up while working a summer job in 1997, I bought the 6MB Canopus Pure 3D card based on the famous chipset and never regretted it for a moment. I used that card for several years until buying a Voodoo 3 3000 later on.

Being that my retro rig was supposed to be of a 1998 vintage, I had originally started looking at the Voodoo 2 released that year, which was superior to the original in every respect. My next choice was the AGP version of the 3dfx Voodoo 3. Unfortunately, both of these models were fetching well over $100 on eBay, and outside of my budget for this weekend project. They are simply in high demand and are genuine collectors items at this point.

Undeterred, I shifted focus to another part that was a bit less popular but still had all the 3dfx flare of 1998 – the 3dfx Voodoo Banshee. The Banshee was a first for 3dfx in two respects – it was their first single chip 2D/3D solution and their first AGP based card. The 3D portion of the core is almost the same as the popular Voodoo 2, but had only one texture mapping unit instead of two. The resulting performance drop was partially offset by a higher core and memory clock speed but it still had plenty of power for games of that generation. As an added bonus, the 2D performance and image quality of the Banshee was excellent – almost as good as the top notch 2D cards of the time and removed the need for a separate 2D and 3D card in the system.

I was fortunate enough to stumble upon an awesome deal on a 16MB Ensoniq brand Banshee card for only $25 USD. It was probably only still available because the eBay listing didn’t include the words ‘3dfx’ or ‘Voodoo’ in the description. After the shipping, duty and exchange I think it came to under $50 CDN. Not too bad for a rare piece of history.

Ensoniq no longer exists, but was best known for their audio products. They were purchased by Creative Labs shortly after this card was produced. After seeing some of the other Banshee models from other companies, I actually like this card best because of the larger heatsink on it. Most of the other cards have rather small chipset style coolers. They all seem to be passive, but I can confirm that these cards do get rather toasty under load.

In 1998, dual monitor outputs and DVI were reserved only for elite workstation cards and specialty products. Just a simple VGA-out can be found on the Ensoniq Banshee. Some cards of this era differentiated themselves with TV S-Video and Composite outputs, but nothing that would interest anyone today.

It was interesting to see two mysterious headers on the card. One is a 40-pin female IDE-style connector, and the other is a 26 pin header of some sort. My first thought was that they may have been for future SLI support, but after doing some digging these turned out to be standard feature connectors. These were found on many cards of this vintage for daughter boards and other add-on modules. Technically, the 36 pin SLI connector found on Voodoo 2 cards is indeed a feature connector of sorts as it allows the cards to communicate over a high-bandwidth channel without having to saturate the PCI bus.

The earliest 3D cards were all PCI based, but in 1998 many first generation AGP variants were on the market, including the Banshee. A lot of people building retro rigs seem to forget that there were actually several AGP ‘versions’ to hit the market over the years and not all were backward compatible. An AGP 1x card released in 1998 very likely won’t work or even fit in an AGP board released a few years later. 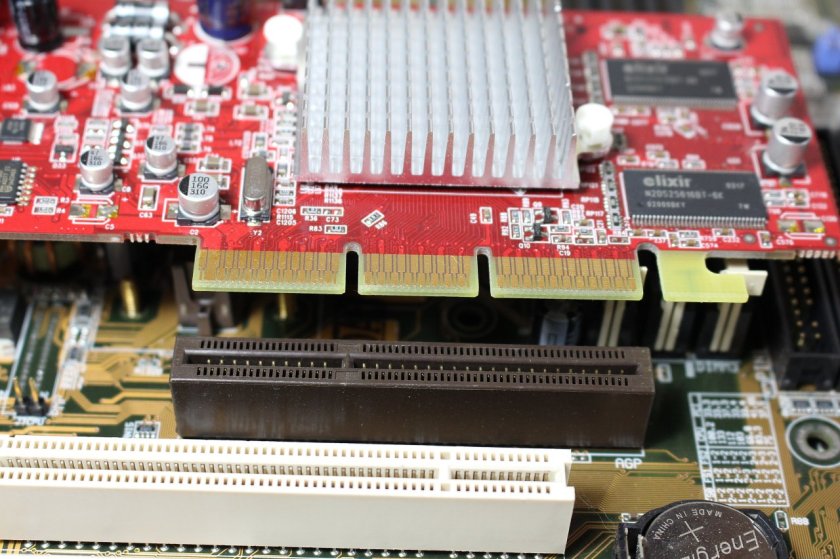 AGP 1x and 2x are very similar and provide power to the card at 3.3V. AGP 4x and 8x came out a few years later and were limited to 1.5V. As you can imagine, putting 3.3V through a card designed for 1.5V could be pretty catastrophic. To prevent these problems, slot and card ‘keying’ were implemented to ensure you couldn’t physically insert a card into an incompatible slot. As you can see above, the 3.3V AGP 1x slot on the ASUS P2B has a plastic ‘key’ about a third of the way in from the left of the slot. A 1.5V 4x/8x slot would have that same key, but in a different position closer to the right of the slot.

Interestingly, some cards that came out later on were actually compatible with both 1.5V and 3.3V AGP slots and had two key indentations on the card. The card in the image above is a 2003 era ATI Radeon 9200 SE. I have used this same card in a newer 8x slot machine as well as the 1x ASUS P2B.

The budget priced Radeon 9200 SE is actually about 9 times more powerful than the Banshee. I had considered using this Windows 98 compatible card in my retro build, but it just didn’t have the same nostalgic value that a genuine 3dfx card does. For now, it’s been serving as a spare.

I was really excited to get a 3dfx card – especially without having to shell out too much. It’ll be great to use a card from that era and to use the 3dfx proprietary glide API for many games as well. I think that the Banshee is a perfect match for the build and I look forward to getting everything put together!

Next up, I’ll take a look at a couple of sound card options, including both ISA and PCI cards. In an added twist, I also bought a compact micro ATX socket 370 system that I’ll evaluate as well.