It’s been a while since my last retro build post, but the build is finally complete! Actually, it’s been done for several weeks, but I just haven’t have time to break out the camera and get some pictures.

Without further ado, let’s have a look at the finishing touches and the final build!

For the case, I decided to use an old Antec NSK 3480 that I had lying around. I love the very simple appearance, but most of all, the small dimensions. With a depth of only 14 inches, it’s only as deep as it is tall. This can make for some challenges, but also makes it a perfect fit for slim boards. 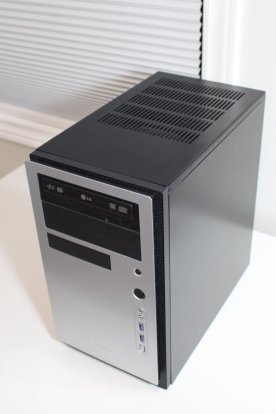 Although it really doesn’t look like a retro box, I like that it’s very unassuming and feels a lot like a ‘sleeper’ build. I’ve got an old Pentium 90 and yellowed 486 rig that I’ll save for that true old-school appearance! 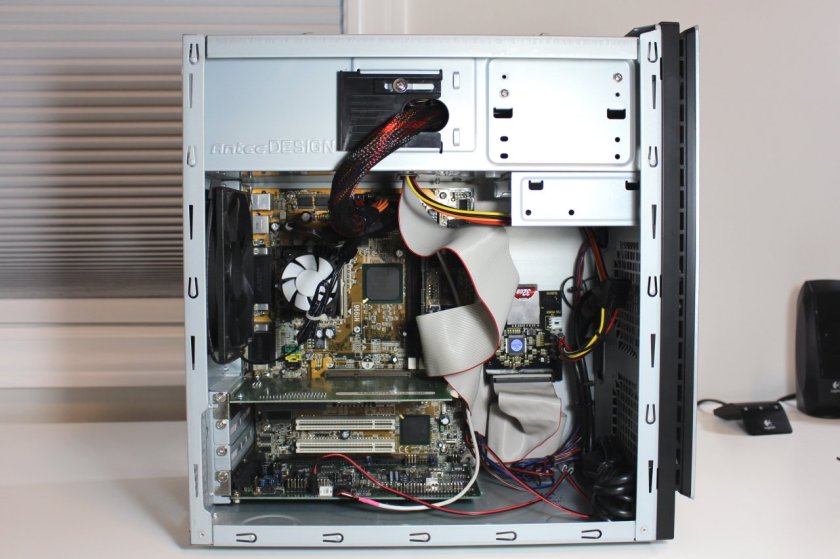 The Antec case was perfect for the MSI MS-6160 board. It even left enough space at the front of the case for the IDE-to-SD adapter board. For more detail on the motherboard, check out Part 3 of the series.

Getting the SD adapter mounted was the only case modification necessary. I drilled four standard motherboard standoffs into the case and securely fastened it with screws. I hope in the future they may offer a PCI bracket solution for the SD adapters. I have to open the case to swap out SD cards, but since this system has working USB, I’d rarely need to do that. For more information on this adapter and retro storage, see Part 5 of the series.

I had to remove the lower hard drive mounts in the Antec case to allow for an ISA slot in the bottom position. Notice the CD audio header as well as the PC-Speaker input. Rather than relying on a small case-mounted speaker, all PC-Speaker output gets channeled directly to the Sound Blaster card. Even the post beep in the BIOS is audible through the connected speakers. I wasn’t originally going to bother doing this, but some games like the first Commander Keen used PC-Speaker audio. Overall, I’ve been really happy with this Sound Blaster card. For more info, see Part 4 of this series.

The 3DFX Voodoo Banshee fits nicely in the top most slot position. I was considering a small fan for the heatsink as the card does get pretty toasty, but I may just leave it for now. More info on the video card can be found in Part 2.

As you can see, there really is very little space between the power supply and the optical drive. Only newer, shallow drives will fit. I was thankfully able to find an LG IDE model that supported CD audio out and had the correct dimensions.

Interestingly, I found the drive way too loud for older games that needed to access the drive frequently. I used an old freeware Nero application in Windows 98 to throttle the drive to 10X speed. There is also a great DOS utility called CDBQ that can achieve the same in DOS mode.

The power supply is an Antec ‘Earthwatts’ 380W model that came with the case. It’s reasonably quiet and efficent and offers plenty of power for this rig. 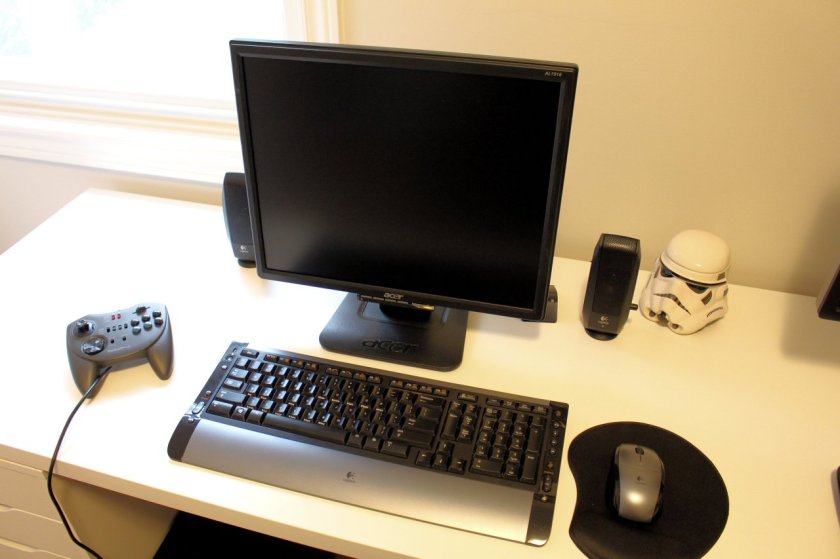 All of the peripherals that I’ve been using with this build were found at local Value Village and Thrift store locations. It’s amazing what you can find there sometimes. The monitor is an old 19 inch 4:3 aspect Acer model that does a great job with older, low resolution games but also looks great with newer games too. I really didn’t want to use a 16:10 or 16:9 monitor on this rig as games of this era are rarely designed for anything other than 4:3. I paid only $7.99 for the monitor if you can believe it.

I have a bunch of PS/2 mice and keyboards, but I really like this Logitech S510 combo. It was another Value Village find. I think I paid less than $20 for it. Many of the special function buttons don’t work in Windows 98, but I like the convenience of being able to just move them without disconnecting things if I need extra space on my desk.

I went back and forth a bit with the build, but in the end, here are the specs:

I’ll have to do another post in the future with the actual setup in Windows 98 and DOS mode, but suffice to say, the rig works great. Just about everything I’ve tried works in Windows 98, and if not, DOS mode takes care of it. Below are a list of games I’ve bought on either Steam or GOG recently:

Other games that I already owned and work great include:

These titles brought back so many memories and I’ve had a ton of fun playing them. I keep finding other games that I used to play, so I’m sure my classic game collection will continue to grow. For anyone interested in buying classic games, GOG is an awesome site.

Running a rig this old is not without it’s challenges, but then again, neither is using DOS box emulation or running even older hardware. There have been some problems, including games that will crash out in Windows 98 – like the collector’s edition of Tie Fighter. I’ve found that titles that wouldn’t behave in Windows 98 would often work better in a true DOS 7.1 mode. Other games don’t work with CPUs faster than 200MHz – like Jazz Jackrabbit and other Turbo Pascal based games. Thankfully a simple patch exists that fixed this issue.

I also had some challenges with the 3DFX Banshee drivers but with some patience and research I was able to get things running well.

In the end, I’ve been very happy with this versatile retro rig. It’s handled just about everything I’ve thrown at it and will hopefully be in my collection for many years to come!

I’d also like to take a moment to thank Phil (@philscomputerlb). His site and YouTube channel (PhilsComputerLab) is a treasure trove of information for those wanting to build retro gaming rigs. His videos and site helped me on many occasions! Thanks for sharing your knowledge!

There are tons of other other great resources available for those interested in building a retro rig. Definitely check out the Vogons forum, videos from LGR (@lazygamereviews) and Victor Bart’s RETRO MACHINES as well!